GO to the TOP of this page (press blue up arrow).
Look for the title above; more titles are found
under more
To realize the importance of being an American citizen is to understand America's history.  We'll travel back in time and learn about some of he peple and events who made our country a strong democratic society that we enjoy today. Below is a time line showing a few leaders who defined the principles o f our country in the Constitution of the United States written in 1776.  Shortly after the Constitution a Bill of Rights was added.  The freedoms and rights listed were as follows:
Early American History  -   1490   to  1864
The last one, Right to Enjoy Many Other Freedoms, means that Americans have more rights and freedoms than those listed in the Constitution. When the United States of America started the leaders understood that by using laws to protect the freedom and rights there would be more definition of what freedoms meant. For example the right to a free appropriate public education for Deaf students was made into law in 1973. Think about all the events that happened since 1776 which contributed to our present day status.  When you look at the time line don't think first, second, etc. Look at the amount of time between each event. And, as you see events know that thousands of people fought and died for America's principles and thousands of people worked to define and protect the rights and freedoms of the Constitution.

Why are the States of Colorado and Utah interesting states to learn about geology? 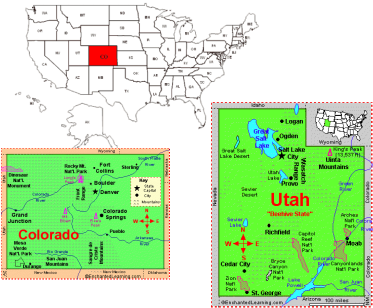 Fall 2013
The first part of this trip was a drive around the State of Colorado and Utah. It began in  southeastern Colorado at "Pikes Peak", the most famous of 53 mountain peaks that are higher than 14,000 feet.  These 53  mountain peaks are known as the "fourteeners."  Also, explored in the southeastern part of the state were  the "Great Sand Dunes".  The contrasting terrain of "Mesa Verde" National Park and Black Canyon of the Gunnison National Park, in the southwestern part of Colorado,  and "Arches National Park" in Utah were visited and explored. Utah is on the western border of Colorado.
Along with Mesa Verde National Park and Black Canyon, in the Southwest part of Colorado, there are several other interesting rock formations and minerals.  One mineral that was sought after in 1876 was gold near a town named Ouray.  To get a closer look at the peaks and mountain passes we passed through the unexpected in an exciting  jeep ride through these mountains, from Ouray to Telluride was done. The ride began very early in the morning, and after we left  the road had been closed due to snow and ice.  Wait until you see the drops from the edge of the road!!!!
See if you can find the National Parks in bold letters on the maps above.
Geology is the study of the earth.  It investigates how mountains are made, the different types of rocks, what minerals are found within rocks and how Earth is shaped by geological forces.  What happens below the Earth's surface?  Geology is studying history. History is what has happened in the past. To learn more about geology go to the blue arrow at the top and click on the topic "geology."

Why do you think the 53 mountain peaks are called or named the "fourteeners?

This page is the introduction to three different trips. The first trip was along the northern part of the Mississippi River. The first car journey was 1,650 miles through the states of Michigan, Minnesota and Wisconsin.
The second trip is through three national parks. The national parks are in Montana, Yellowstone National Park,  Wyoming, Yellowstone National Park and Grand Teton National Park, and South Dakota, The Badlands.  The second car journey was 5,000 miles.
The third trip is through the states of Oklahoma, New Mexico and Arizonia.  The National Cowboy Museum is in Oklahoma.  The Petrified Forest and the Painted Desert are in New Mexico.  The Grand Canyon is in Arizonia. The third trip was 4,500 miles.
Each video explains how the land developed or was shaped starting millions of years ago.   At the top of this page there is a tab for national parks, the National Cowboy Museum, Mississippi or the UP of Michigan.  Click on the tab of your choice to learn about the lands and rivers of America.

Two national parks are located in New Mexico. The Painted Desert and the Petrified Forest.  The land here is 1.8 billion years old. 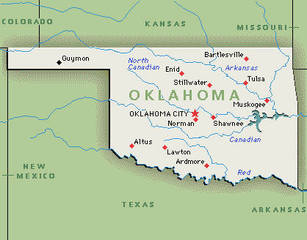 This  journey began in Montana.  The first stop was Yellowstone National Park. The mountains, lakes, rivers, waterfalls, mudpots and geysers. From what? A volcano Then, what happened the volcano collapsed.  This area is called a Caldera.  Yellowstone's whole area mountains, lakes, river, waterfall, mudpots and geysers happened where?  A caldera.    See the action inside the earth.  Under the earth it is hot. The water here is hot like making coffee.  That's why Yellowstone is a special place. Those things happen.

Do you see Yellowstone National Park on the map?
Can you find Wyoming (WY) or South Dakota (SD)?

Wyoming
Grand Teton National Park is in Wyoming.  Do you see Grand Teton National Park on the map?  The land within this park was formed by gigantic plates inside the earth rubbing together. Then, an earthquake happened.... the earth rose, the mountains formed, and the land dropped making a valley.  Last, huge glaciers, sheets of ice, flowed from Yellowstone to the Tetons shapping the landscape.  See the videos showing this process.  The process is called erosion.

South Dakota
Here is Badland National Park.  This National Park was once a sea.  What you see in the videos is the bottom of an ocean long ago.  Many fossils were found of animals that once roamed this land.  A fossil is part of the animal's skelton that was been preserved or hardened.  Do you see Minnesota, Wyoming or  Montana?