Garden of the Gods
Garden of the Gods is east from Pikes Peak.  It was formed from particles of rock which eroded from the the ancestral rockies.  Take a look at the time line to see the age of these formations. It is a sculptured rock garden made by Mother Nature. 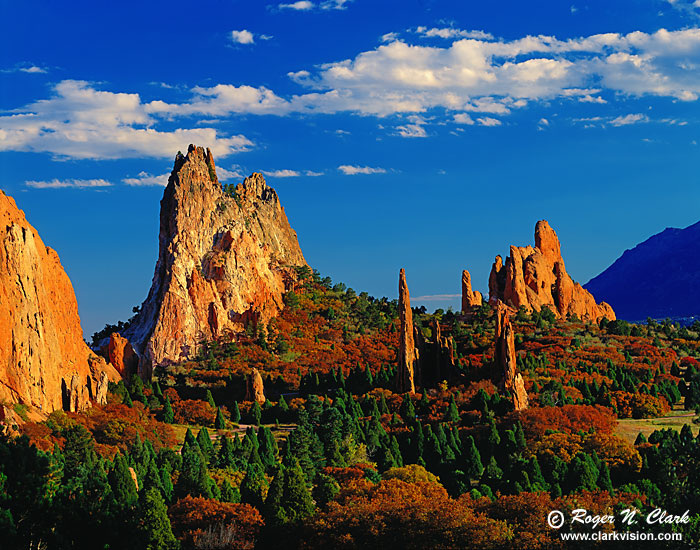 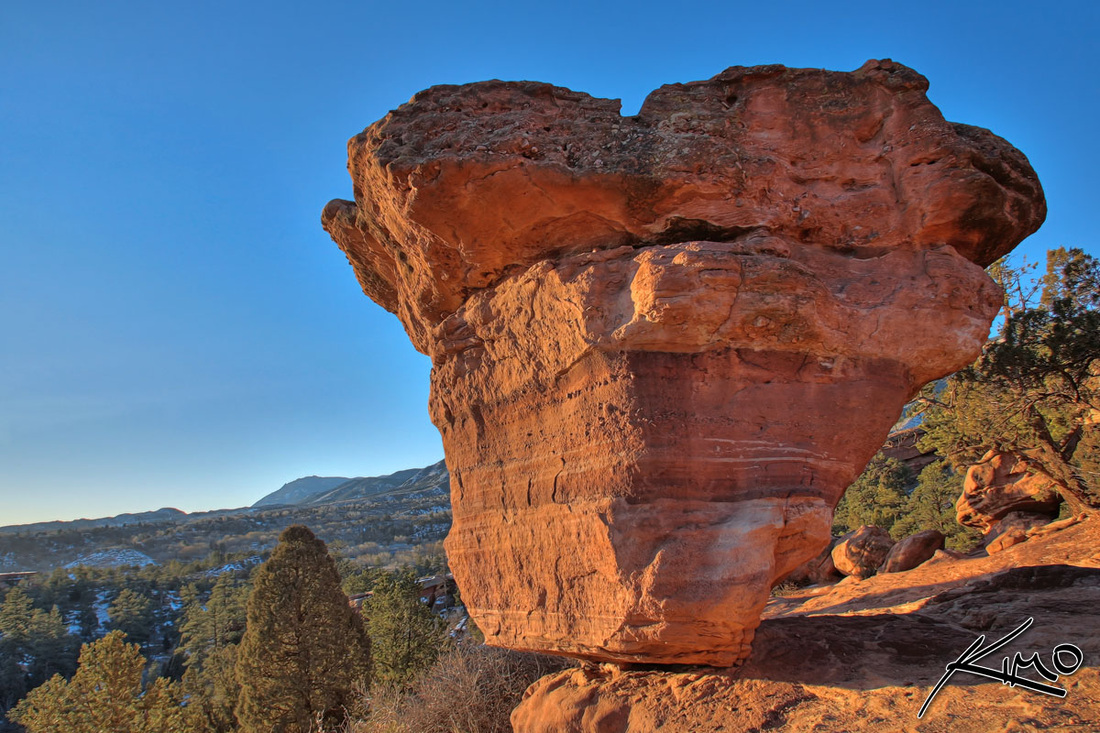 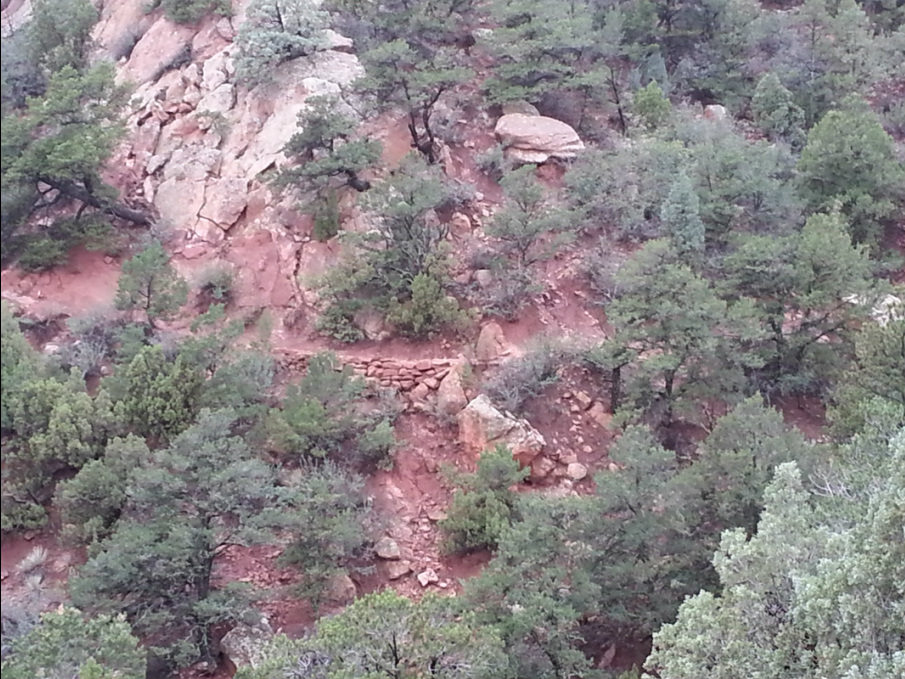 A walking trail through Garden of the Gods. 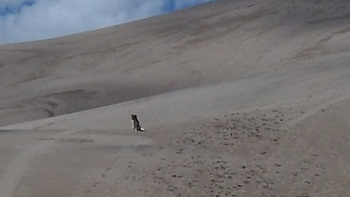 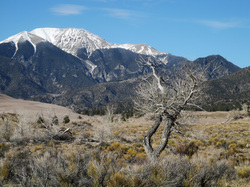 This is how it happened....
The Sangre de Cristo Mountains are in south central Colorado.  They rise east of the  Great Sand Dunes. This mountain range developed from rifting and plate tectonics.  5 million  years ago they shot up as one large mass of rock.  The rock is mostly igneous. The tectonic force folded and faulted the mountains in several different directions.  There are major "fault" lines lying on the east and west side of the range.  Also, found within this mountain range, are many smaller fault lines.  Fossils of sea life can be found at the higher elevations. Meaning this area was once covered for millions of years
a sea.  The  Great Sand Dunes sit at the base of this mountain range. Winds swirl from both west to east and east to west.  When the winds from west to east and east to west meet the dunes become steeper, more vertical and higher. 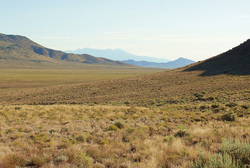 The San Luis Valley is between the Sangre de Cristo mountains, shown above,  and the San Juan Mountains shown below. The Great Sand Dunes are part of this valley.  Today, this valley is defined as a desert.  The meaning of desert is a place that receives 8 inches or less rain yearly. The wind blows from west to east and east to west carrying sand across the valley floor.  Change constantly occurs. An example of change is this valley was a lake. Then, over thousands of years, the water evaporated leaving deposits of gravel, clay, salt and volcanic ash. To help understand how large valley is;
it  is the size of the State of Connecticut.
This valley is defined as a "rift valley."  A rift is when the Earth's crust pulls apart in different directions.  Southwest Colorado and northern New Mexico, Texas and northern Mexico twisted clockwise away from Northern Colorado.
A slice of the crust and mantel dropped 5,000 feet opening up this valley.     WOW!!!
As you imagine these land transformations happening, during millions of years  think "BIG AREA!" 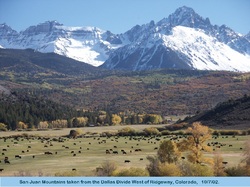 The San Juan Mountains are west of San Luis Valley.  This mountain range was made through the volcanic process.  The rock in the San Juan Mountains is mostly quartz. Hot liquid erupted from the volcanoes then changed from a liquid to a solid called "quartz rock." Because there was so much volcanic action minerals like gold and silver were found in these mountains. These minerals are part of the earth's core. As the volcanic process happened mineral veins were embedded within the mountains.  The mountain range is 17 to 35 million years old.
At the top of this section is a picture of the Great Sand Dunes.
You can see the dark color of sand.  The dark color is small pieces of quartz
rock that have been swept from the mountains onto the dunes. 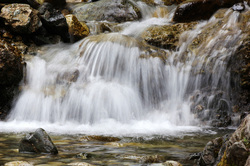 This is Zapata Falls located South of The Great Sand Dunes.  The falls' water is the flow of melted snow, ice, streams and creeks that run down the Sangre de Cristo mountains.  The water has carved open bedrock developing this 25 foot waterfall. This stream flows into the Rio Grande River. During its' travels it provides water for forests, waterfowl, insects and plants.
The Earth's surface is constantly changing and moving.  This happened in the San Luis Valley. During the time when the Ancestral Rocky Mountains were formed the mighty Rio Grande River changed direction. The Rio Grande River's headwaters are at the Continental Divide high in the San Juan Mountains.  At the northern end of the river, near the Continental Divide,  evidence shows the river has changed its' course three different times.  There are three different terraces. A terrace is the bottom of a valley floor where the river once flowed.  Above that you would step up to a second valley floor where the river flowed during a different time.  And again, a third level creating a terrace effect.
All of the information here is to explain how our earth is connected.  There are four very different ecological systems in southwestern Colorado.  Yet, they all work together to make a living earth.

Ouray, Colorado located in the San Juan Mountains.  Jeep is the one vehicle that can grab hold of this road.  The road leaves Ouray and goes to Silverton, Colorado.  This area has been evolving for 120 million years. The height is 14,000 feet.  This area is called the mineral belt.  Minerals come from the earth's core.  Mineral finds are found along fault lines.  A fault is a break in the rock where there has been movement.  Since 1876 minerals like gold, silver, lead, copper and zinc have been and continue to be mined.  Ouray has earned $125,000,000 from these minerals. Silverton has earned $150,000,000.
For fun, the town of Ouray has a mineral swimming pool.  The water is piped from a mineral spring located in Box Canyon.  Box Canyon is limestone rock.  Limestone rock breaks down more quickly than volcanic rock.  The mineral water is piped through the rock passing faults that are still hot from the San Juan Mountain volcanic action millions of years ago.
Can you believe that?

How the earth is layered. There are four layers.
1) The Inner Core. The Inner Core is solid. It rotates and is more than 7,000 feet below
the crust.
2) The Outer Core is a VERY HOT liquid. It is a larger area than the moon. As the solid Inner Core rotates  the liquid, in the Outer Core, swishes around the Inner Core.  This produces a magnetic field. This magnetic field keeps us safe from solar wind. Scientist have recently learned about the magnetic field and solar wind.
What is a magnetic field?  What is solar wind?
3) The Mantle is a solid.  Yet, the temperatures are so high the heat moves rocks so the heat and rocks become like  a slushy drink. The heavier rocks move to the bottom and the lighter rocks move to the top.  This is magma. Magma is what comes from volcanoes when they erupt or explode.   The mantle is always  moving. Volcanoes erupt from the mantle.  The movement within the mantle produced HUGE plates. The plates are where continents like , North America, sit.

There are three kinds of plate tectonics.  See Below
.. 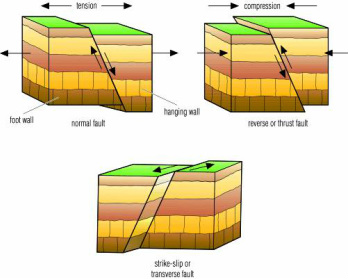 4) The Crust is what we walk on.  We walk on igneous, metamorphic and sedimentary rocks.  This composition of rocks sits on the six large plates found around the world. The ground we walk on originally came from the core of the earth. Here are two questions to think about...........
How did rock change to soil and clay?
What about the oceans and lakes?
Are they part of the plate tectonic process?

Earth's Timeline: From Birth to Present